“In Him the whole building is joined together and rises to become a holy temple in the Lord. And in Him you too are being built together to become a dwelling in which God lives by his Spirit.”

As Malankara Orthodox Christians migrated to the U.S., there were larger concentrations in major cities like New York, Chicago, and Dallas. With a desire to have spiritual fellowship and the dream of Orthodox worship again in this foreign country, a handful of faithful members started gathering at apartments and garages and praying together on Sundays. Those faithful believers were Mr. John Mathew, Mr. E.M Jacob, Mr. Mathew Malil, Mr. Abraham Mathai, Mr. Chacko Thampi, Mr K.V. Thomas, Mr. Sunny Zachariah, and Mr. P.V. Varkey. They brainstormed on the possibilities and came to a realization that changes were very remote. However, they did not lose faith in their search and continued to work hard with spiritually kindled inner energy and dedication for their purpose. By God’s grace, their prayers were answered when they contacted Rev. Fr. T.M. Zachariah from New York, who subsequently agreed to come to Dallas and conduct Holy Qurbana one Sunday in which they used the Southern Methodist University as their location. In 1973, while they conducted their first service on the campus of SMU, they undoubtedly were laying down the foundation stone of the first parish in the Dallas/Fort Worth region. 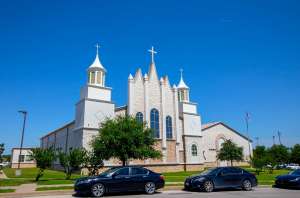 This small group worked diligently to gain momentum to establish the first Malankara Orthodox parish in the area. They met night and day to discuss and map out their plans and in 1973, they decided to work towards a parish with St. Mary as the Patron Saint.  During the early years of its growth, the church underwent ample struggles and difficulties. Finding a place to worship itself was one of the biggest difficulties. The parishioners had to move from place to place to find accommodating hosts, and had to depend on the mercy and magnanimity of others. With God’s providence and St. Mary’s perpetual intercession, this small parish grew stronger day by day through the years to its present status.

Rev. Dr. C. O. Vargis served as the first vicar of this community in the early 1970s. The next vicar of over 5 years was Late Rev. Fr. Koshy P. John. In 1977, the community decided to pledge allegiance to the Catholicos of the East which resulted in a new parish on the Patriarchal side. As the first Diocesan Metropolitan of the U.S., the Late Lamented H.G. Thomas Mar Makarios was very encouraging and supportive of this community and even made a couple parish visits. The visit of H.H. Moran Mor Baselios Mar Thoma Mathews I, along with H.G. Thomas Mar Thimothios and H.G. Dr. Thomas Mar Makarios, in 1979, was engraved with golden letters in the history of this parish. The grand reception given to the chief guests, the memorable celebrations that followed, and the public meeting, with the participation of local religious and secular leaders, were exuberant and remarkable. They left lasting impressions on the parish in the succeeding years. The next appointed vicar of this parish was the Late Rev. Fr. Zachariah Venattukalathil. He led St. Mary’s with a new vision and a new light. In 1980, Rev. Dn. John Kunnathusseril joined the parish while he was doing his theological studies at SMU and assisted in the activities of the parish. In 1981, by the perseverance of the faithful members and through the intercession of St. Mary, the first place of worship that they could call their own was at 5528 Forney Road in Dallas.

Meanwhile, after Fr. John was ordained to the Holy Priesthood in 1983 by the Diocesan Metropolitan at the time, H. G. Dr. Thomas Mar Makarios, he was appointed as the vicar of the parish and remained vicar until 2004. The parish worshipped at this facility in Dallas until 1989. As the membership continued to grow, the need for a larger facility became imminent and subsequently, the current property at 14133 Dennis Ln in Farmers Branch was bought. The Christmas celebration of 1989 marked this commencement of worship at this new facility, and the parish found a safe haven in their new location. St. George Orthodox Church, another current parish of the Dallas/Fort Worth Area, was formed around this time 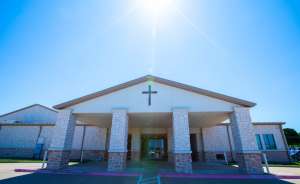 In 1998, St. Mary’s Malankara Orthodox Church celebrated its Silver Jubilee of the sustained spiritual community and blessed growth of Malankara Orthodox Christians of the Dallas/Fort Worth area. The spiritual organizations which included MGOCSM (Mar Gregorios Orthodox Christian Student Movement: an organization of the Malankara Orthodox Church for kids ages 13 and above), Sunday School, Martha Mariyam Samajam (Women’s Ministry), and OCYM(Young adults and young families’ ministry) flourished and the parish was truly reaping the fruits of the initial faithful believers who sowed the seeds for the growth of this parish. The strong spiritual growth and closeness of the parish made it especially difficult when the parish experienced another sizeable split. Half of the members left in 2004, along with the Vicar at the time, Rev. Fr. John Kunnathursseril to form a new parish, which is currently St. Mary’s Orthodox Church of India in Dallas, Texas. The small facility at the time was not able to fit the growing members of the parish. This was rather difficult for both the adults and the children to be separated from those whom they prayed together with while growing up in Dallas.

During this troubled time, two priests served in the interim from 2004 to 2005: Rev. Fr. Reji Mathew and Assistant Vicar Rev. Fr. Mathews George.  However, the parish was given a regular Vicar again in 2005. Rev. Fr. Thampan Varghese was the newly appointed vicar and led the church to become one of the largest churches in the Southwest Diocese.  During the leadership and guidance of Fr. Thampan Varghese, in 2009, the old facility was demolished and groundwork for a newer, more elegant and fitting facility for the spiritual needs of this large community began. The first Divine Liturgy was celebrated at the new and improved facility on Sunday, February 20, 2011. The parish was consecrated on May 13th and 14th of 2011 by His Holiness Moran Mar Baselius Marthoma Paulose II. Along with His Holiness, the Diocesan Metropolitan His Grace Alexios Mar Eusebius, H.G. Dr.Gabriel Mar Gregorios, H.G. Joshua Mar Nicodemos  & H.G. Abraham Mar Epiphanios were also present at the consecration. Rev. Fr. MP George led the choir and assisted with all the consecration needs.

Futhermore, in 2012, St. Mary’s Orthodox Church was elevated to St. Mary’s Orthodox Valiyapally. In June 2012, the Metropolitan of the Southwest Diocese decided to rotate the priests of the Dallas parishes to match the system in India. With this new change, the priest from St. Gregorios Malankara Orthodox Church of Dallas, was made the new Vicar of St. Mary’s Church and resided as the Vicar until January, 2019. Under the leadership of Fr. Raju Daniel, the church continued to grow with strong and thriving spiritual organizations which include MGOCSM, Sunday School, FOCUS, OCYM, and Martha Mariyam Samajam. On January 2019, Rev. Fr. Rajesh K. John, the previous vicar of St. Gregorios Orthodox Church Houston, was appointed and now serves as the vicar of our church. There have been many changes and developments in the parish since the 1970s but one fact remains the same. St. Mary’s Malankara Orthodox Valiyapally was formed to serve the spiritual needs of the Malankara Orthodox community in the 1970s and still strives to serve the needs of the members of the Malankara Orthodox Church of Dallas today.